Hey! So, after last time being incredibly down in the dumps last time and getting it out of my system by explaining why, I think I got a lot done in November! My goal was to finish up to the boss in the shrine because that marks a change in the game itself. The next areas are going to be challenging because unlike everywhere else so far which has the base of snow, the next place does not. So, I basically have to start from scratch with those, build up what I want to use, and edit it for cohesion!

But that's just how it goes, right? As for what I finished up, this area you finally have access to Relenia so there was a lot of testing with her cover ability and making sure it worked as it did in the original game. After a small snafu where she decided using Revive Herbs on a deceased party member was cover-worthy, I am pleased to say she is working as intended! Granted, sometimes, her dead body will go down exactly where she goes down, whether it be in her home spot or in front of someone, but that kind of adds to the charm. I think. 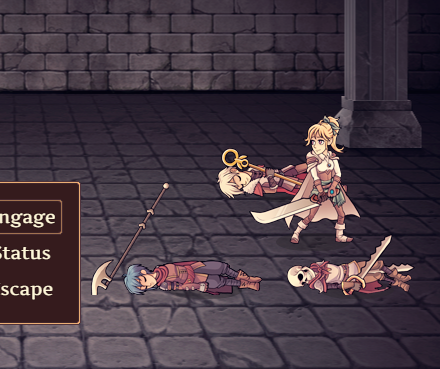 Otherwise, beyond that, I finished up the Shrine dungeon with all its puzzles (yes, the Maiden Naming puzzle comes back), and I even sat down to also include a message log for the game. Since there is a lot of text (just the way I like it), I figured it'd be extremely helpful, so I made it work! I'm still working out the bugs with opening and closing the log, but it pretty much works! Pretty handy for a puzzle like the Maiden Naming one where you have to rely on clues.

Anyway, that's all I have! Thank you to those who have been so patient with me while I work on this. I know I meant to be faster, but sometimes I have to slow down and take breaks. Sometimes game make is a lonely endeavor, but I have a lot of support behind me so thank you for that always.

Looking amazing, ronove! I always imagined astra's (that was her name, right?) sword to be comically huge. I'm a bit sad at its sensible size. :P

Haha! I have to be able to fit it sensibly in Astra's sprite, unfortunately! Can't make it TOO comically huge. And thank you! :D