Another month and another devlog is here! 🌻

Since Star Stealing Prince: Definitive is a remake of Star Stealing Prince, I have the pleasure of having basically everything made in some respects. For example, I don't get stuck on map layouts because I can just refer back to the old one to see how I did it there. The same holds true for puzzles, but there are definitely more in Definitive than the original.

When I originally made Star Stealing Prince, I was pretty sick and very down about being sick. It was my happy place where I could just spend hours game making and not worry about it. But, seen as it was also my first finished game (Memento Vivere don't count for you guys keeping count on that), there are some not great design choices that you really only experience with age. As I've been remaking maps, I've tried to make them more straightforward or have more purpose. It also helps I'm not making the story up as I go (I came up with a lot of backstory like third to last dungeon? So all the foreshadowing and some flavor text is questionable). Now that I have sequels already there, I can just hint toward those more effectively! (Jury's still out on whether or not I'll return to those to rewrite them; probably not because I have way too many writing projects keeping me occupied.)

Anyway, I wanted to more specifically talk about maps and how it is to take a map from VX, reconceptualize it, and get it working in TileD/MV. Almost all of the original maps were made in photoshop and used what RPG Maker scene delightfully calls Parallax Mapping. It was what some people did to get around VX's horrible tileset limit (you only had like 8 with very strict sizes). The problem with this, of course, is the game size ballooned. The original Star Stealing Prince is literally too big for RPG Maker VX to encrypt and compress correctly! Granted, what I made for maps must have been effective given how I hear people still say the game is pretty.

Obviously, when remaking the game, I had more tools available to me. I still don't use the RPG Maker mapping because I frankly don't like it, but that's where TileD (this link is for MZ's counterpart, but I definitely suggest using MZ over MV don't be me!) comes in. Easier than parallax mapping and I don't have to redo the map almost every time I have to change something. Much faster, much easier! 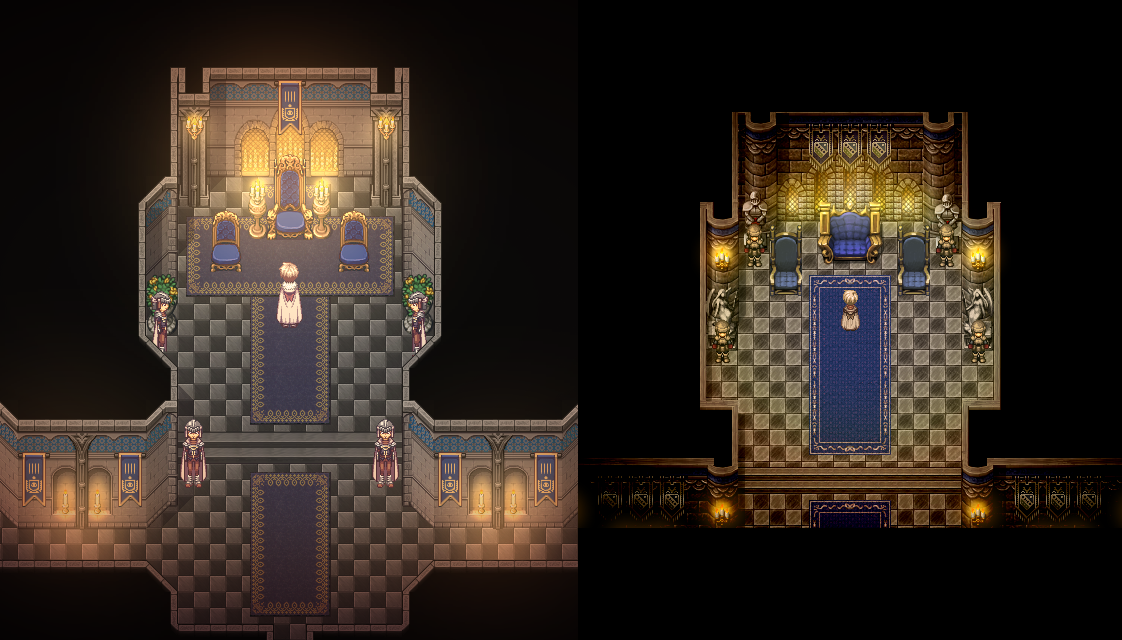 My how far we've come!

One drawback, however between the different RPG Makers how picture overlays worked changed. I haven't been able to replicate how moody the lighting because I don't have that blend option available to me (although I'm sure there is a way I could brute force it, but I'm not quite that savvy). I'm still tweaking everything to try and match it (like right now I see I can probably bring back a little saturation to the blues since it's a little washed out side-by-side), but I am largely happy with how the game looks nice despite the difference. As you can see in the screenshot above, it's the Throne Room. The one thing I wanted to keep in that map was the candles behind the fencing in the back. I thought that was the most iconic part of the room and built the new map pretty much around that. I think it was effective! 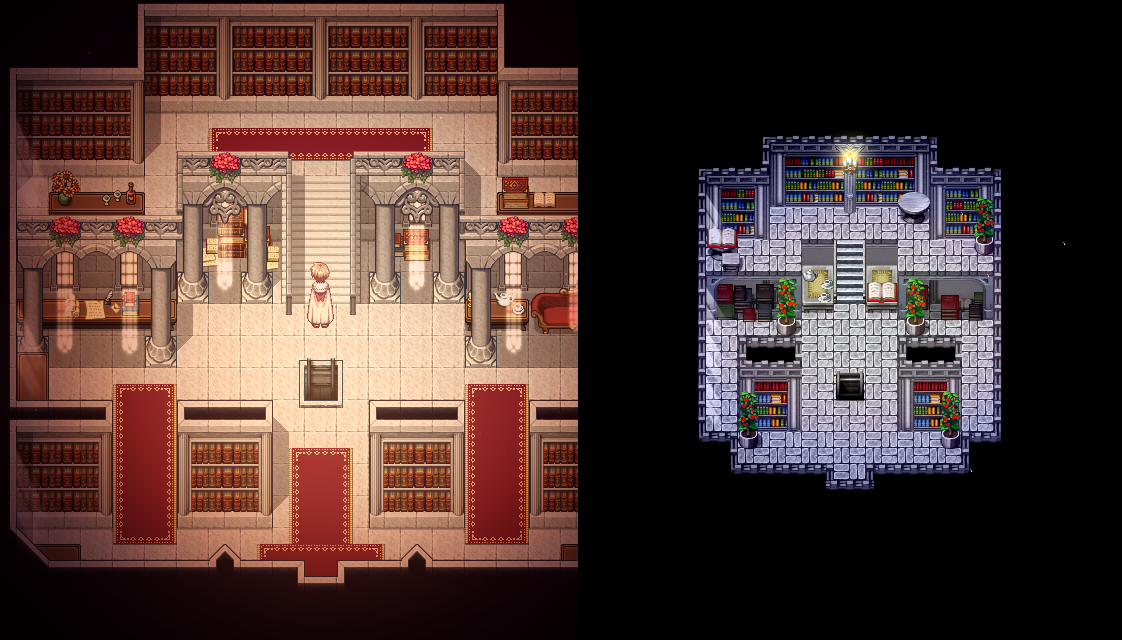 The new version is more OSHA compliant with railings!

This map, on the other hand, grew a lot warmer between versions because I figured given where it is (and I won't say because I don't want to spoil those who have not played the original), it makes way more sense for it to be bright like this. This is also one of the areas that greatly had weird foreshadowing to backstory that I can hopefully update and make better in the new version. I love me some flavor text, after all, and there's so many books!

Anyway, it's fun to see how much has changed since the original game and what all I have to do to try and replicate the same feeling people got from the original. I know for some people, the original will be the best version because that's how nostalgia works and I can't fault them for that. I do hope that those who do play the new version will look as fondly on it as they did the original!

I've got 3 more maps to do for this area and then I can go back and work on monsters again! This place is taking me too long and I'm tired of it!

I never used tiled, I've always been curious about it tho. Gonna take a look at it. Though I'm not very demanding when it comes to my maps so I'm not sure I'll need it. I've recently come back to game making, tho I'm an idiot and making my own tiles so it's gonna take  awhile :P

The maps are looking fire btw. Congrats on the progress :)

I always recommend TileD for anyone who's not the biggest fan of the in-game editor. It provides way more layers so if you're very detailed heavy, it really helps! I know the MZ one has a bunch of new features the MV one doesn't, so when SSP is done and I'm onto my next idea, I'm excited to try out the new one!

Yay for flavor text! (Also, love that there are railings now. Snowe should always have a safe zone; he gets into enough trouble as is.)