A downloadable game for Windows

A necromancer awakens in a dilapidated tower he once knew as a pristine stronghold for his lord and sorcerer that he was apprenticed under. Somehow, the necromancer slept through it all in a sleep so sound, not even his lord's death woke him up. But that's all right; his lord had foreseen this coming and made sure the necromancer had the knowledge and training so he could raise his dead lord all on his own.

Now, it is up to you to help the necromancer collect the spell and tools necessary to bring his lord back to life so that he may take revenge on those who sought him harm. Although, perhaps, his lord's death could signify another kind of rebirth.

Life Eternal is story-driven with a focus on exploration and no battles. Uncover the secrets left behind by your lord's death and piece together the necromancer's own fragmented memories to find your answers.

There are two endings facilitated by a choice at the end.

XBOX CONTROLLER
D-Pad - Movement (hold X to dash!)
A - Confirm & Interact with objects
B - Cancel
Y - Open your main menu
LB & RB - Scroll Up and Scroll Down in menus

Thank you to my wonderful testers!
Appel, BáiYù, Tunos & Zahn

I played your game on stream last night. Overall, I really liked the art - this was clearly crafted by some experienced folks. Unfortunately I did manage to crash the game, and I found the intro to be a bit slow and dull for my taste (though a member of my stream chat seemed to enjoy it, so it's clearly just a matter of taste).

You can watch my full experience with your game below. Use the time stamps to skip to when I start playing your game.

I went through the video, and I'm sorry! I thought I caught all those crashes. That's what I get for having to change something at the very end. :( Sorry about that!

You can also make the dialogue text instant in the config menu under the text speed. Default is 10, but you can make it Instant! Definitely an option if that bothered anyone.

Thank you for giving it a shot regardless.

I've been playing games for the last two days straight, because I'm procrastinating about a project, and let me tell you something: after being disappointed with almost everything new I could put my hands on, this was a GEM. This was a DELIGHT. This was exactly the game I was looking to play and didn't know it.

I love that looking at everything, everywhere, all the time is not only a valid gameplay decision, but actually has benefits! I got all the notes, all the skeletons, and both endings. (And I'll tell anyone playing for the first time, save when you can see the end of the third day's quest, but before you act on it, so you can go back for the other ending.)

The writing in this game was amazing. The details, the journal entries, the moment when you figure out what's going on, but the necromancer is still clueless... It's all got real tension to it, I really started to wonder if he'd figure it out in time, if he'd get a choice at all.

AND THAT LONG WALK BACK TO THE CASTLE IN THE BAD END holy shit. The colour change, the necromancer's... er... you know. I'm trying to avoid spoilers.

AND THE WHOLE THING ABOUT YORICK. AUGH. MY HEART! POSSIBLY ALSO MY SPLEEN!

I love every one of these characters not for any IC moral goodness, but because every one of them was exactly what belonged in that place in the story. It would have been so much less had any of the 'friends' been left out. And your villain was so delightfully villainous, subtly wrong in ways that first made me question my perception of the character and which genre stereotypes were at play and then proving to be exactly the thing I'd doubted.

Anyway, I love this game. If it were a cat, I would rub my face on it. It's just that good.

Omg I am so glad you liked it as much as you did!! Your comments about everything mean so much to me and has put this huge grin on my face! I am glad I added in the skeletons since in the original draft, they were just flavor text but then the brain does a "what if" and then my wonderful beta testers wanted to learn more about them which spawned their journal entries. It's so wonderful hearing how much you enjoyed it and thank you again so much for playing!

I keep getting this error and I don't know how to fix it, please help me T_T 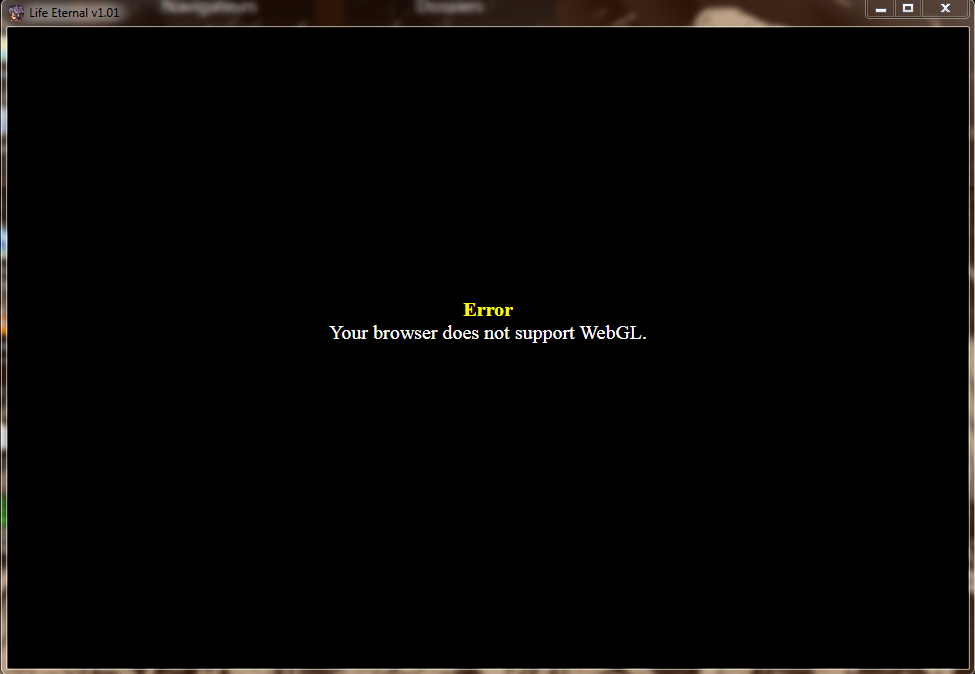 Still not working after updating my drivers 💔 Oh well, I'll just wait for someone to make a video of it instead. I'm sure it's as great as all your other games

Really great game, love the aesthetic, the story, everything. I may have played this game a few times already. I don't know if it's a bug or if I am just missing something. But I spent a few hours looking for the last two cryptic notes inside and outside the tower and wasn't able to find them. But I cannot be a houndred percent sure I didn't miss anything. Maybe it has something to do with me havig v.1.01 but i dont think so. Or I am just missing something.

The last two cryptic notes are hidden on trees! There is a bark pattern different than the rest. This is what it looks like (compare it to the tree nearby)! 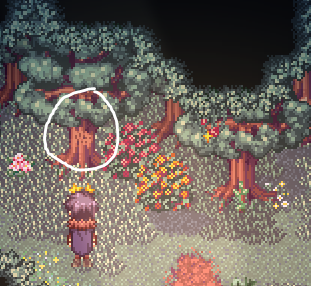 The game will not, however, give you the 6/6 Cryptic Notes at the end because of an error on my part as I forgot to count the one you get from your spell book. This will be updated when the jam is finished as I cannot upload a new version at the moment!

Beautiful game and story! Seems I wasn't paying much attention to cryptic notes, as I discovered a total of Zero! 😅 And only 2 friend skeletons, haha. But enjoyed the gameplay anyways!

I'll have to look into the cryptic notes; you should have at least found one since it's in your spell book when you first find it! But other than that one, they are well hidden. But hey! 2 skeleton friends is better than none! I'm glad you enjoyed it!

EDIT: Yep, checked! I did forget to give players a collectible point for the cryptic note you'll always get. That's on me for adding the "You found x out of 5!" after all my testers were done and did not do a thorough test afterward! As it is in a Jam, I have to wait until the jam is over to update it. Thank you for pointing it out to me!

However I seem to be stuck trying to revive the old necromancer. I'm supposed to pick up the magicked orb, which I picked up earlier. Can't seem to trigger the next event...

There are 2 whole magicked orbs (one is in the library, the other is in the cellarage) and there is 1 shattered magicked orb in an alcove in the walkway (so a total of three)! The one in the alcove is a little hard to see if you're zooming around, so I'm including a picture of where it is. It's south of the stairs that lead up to your chambers. 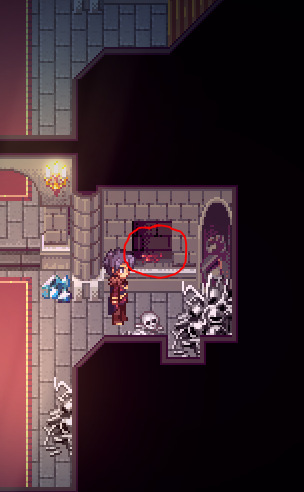 If you have all 3 orbs, you have to find the Magicked Chalk before the necromancer will do anything with the orbs. That is also in the cellarage in a chest on the left-side near the wine casks.

Ah, my mistake. Sorry, misunderstood then. Found them!

Just finished, beautiful till the end. :)

Thank you very much for playing!! I'm glad you enjoyed it even with the little hiccup!

Hello! Just wanted to ask how long the gameplay is.

I'm guessing about an hour, but it depends on your read speed and how quickly you find what you need. The fastest my testers and I went through it was just under a half hour and none of them took over an hour to play while testing.

I hope that helps!

Cool! Thanks for responding. Will definitely give it a try.

Really lovely game!
Absolutely loved the designs and the environmental story telling was really enjoyable ^^
The atmosphere was top notch too!!
I'm not the best with words but just overall it was an mazing experience! :D

Thank you for all your comments!! I am so glad you liked it!

Very lovely game ! I really like how much storytelling you infuse into the environments and flavor text, it makes me want to check everything and try to see all the game has to offer ! I still missed a couple notes apparently, so I'll have to go back and check later :3

The only complaint I would have is the white transitions between forrest screens are rather harsh on the eyes :0

I'm glad you liked the game!! I really wanted to try storytelling with the environment and the flavor text if people went looking so I'm glad it was effective!

And oh no! I'm sorry the forest white transitions were harsh on the eyes! My apologies!

This was such a beautiful and well written game. Keep up the great work!

I am so glad you like the game and I am SO SORRY. The ending bugged out for you and never faded in! I am going to fix that real quick, but thank you again so much for playing!

Lovely game with a lovely, bittersweet story. As always, I love your portraits and spritework.

I'm so glad you liked it!! Thank you so much for playing!

Never have I ever played an RPG Maker game quite like this one. I really enjoyed its story and characters, and it had such a unique atmosphere, as set by its amazing soundtrack, and beautiful artwork. I'm not the best when it comes to reviewing games, but I really, really enjoyed this one.

Aww, thank you very much!! I'm glad you enjoyed it and thank you for taking the time to tell me so! 💖

It's wonderful to see something new from you again, Ronnie :D

Thank you!! I liked seeing your entry as well! It's on my "weekend to play" list atm!

Frogge was part of this? Cool! Congrats on your contest entry, good luck!

I took some of his tiles! So not directly, but since I used some of his REFMAP edits from his site, I credited him!

A charming little game with small but perfect assets that fit the overall mood and story of the game! 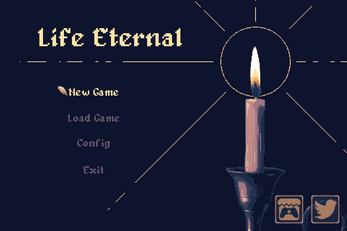 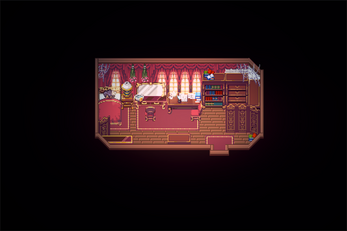 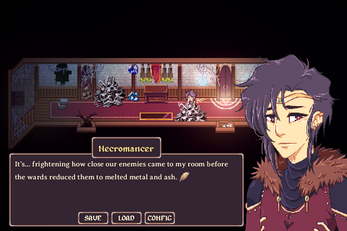 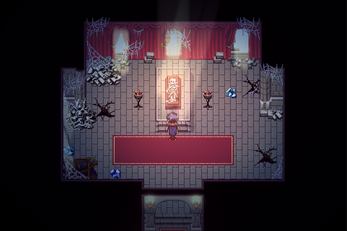 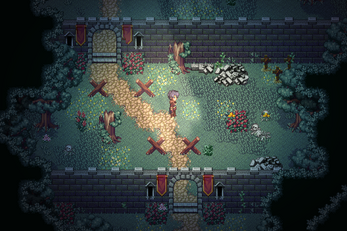